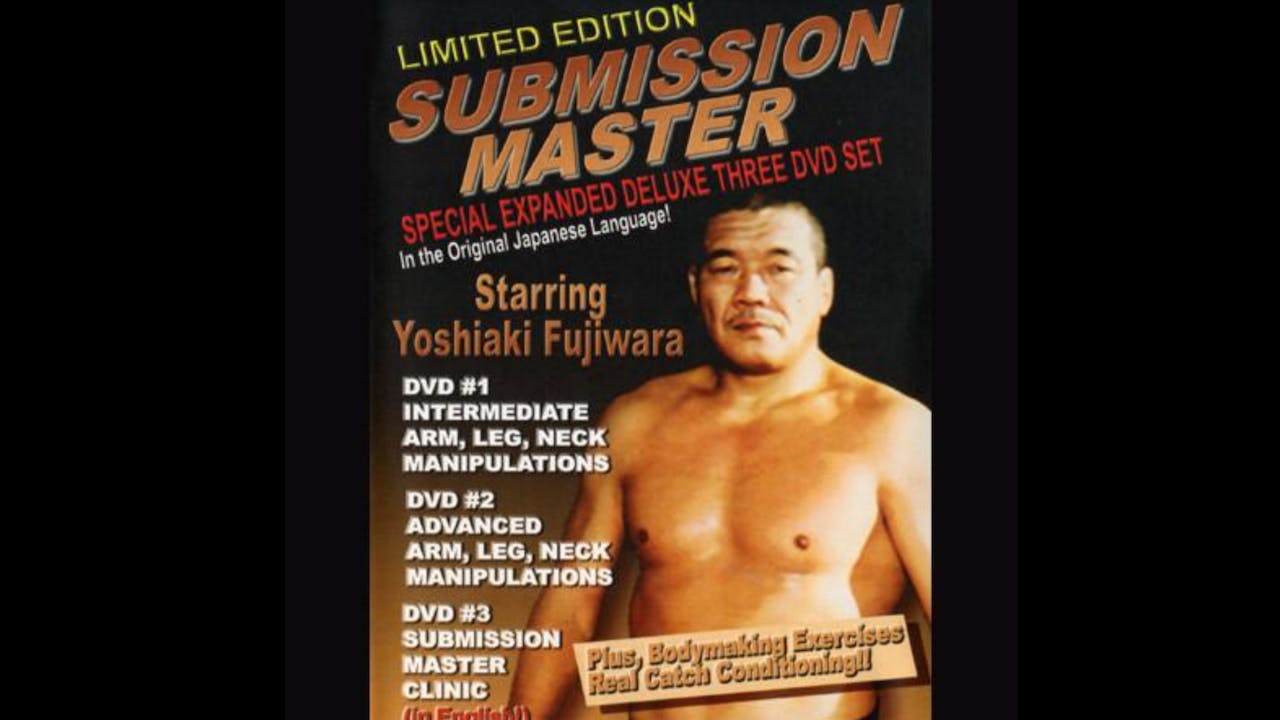 Karl Gotch calls him his best student. He was the training partner of Satoru Sayama (SHOOTO founder), Nobuhiko Takada (Takada Dojo founder), Akira Maeda (Fighting Network RINGS founder), Antonio Inoki (the professional wrestler that fought Muhammad Ali), and also trained and assisted in the training of Minoru Suzuki, Masakatsu Funaki, Ken Wayne Shamrock, and many others.
This is his instructional, long out of print and referred to as "The Holy Grail of Catch Wrestling", brought back in its entirety IN THE ORIGINAL JAPANESE (no translations or subtitles).

Leg II
-Transitions from shinlock with the elbow to toe holds
-Step-over toe-hold variations
-Rough & tumble and gouging set-ups for toe-holds
-Toe-hold variations when someone has your back with hooks in.
-A clever set-up to a toe-hold from the side-double wristlock (this one is nasty!)
-Toe-holds from leg rides
-Introduction to knee bars
-a BRUTAL reverse banana-split submission

Arms I
-Brief overview of the bio-mechanics of the arm joint.
-The proper way to apply the bread & butter hold of catch wrestling, the side double wrist lock (hint: grab the hand, NOT the wrist)
-How to set-up the DWL by "walking" over to it
-How to turn a useless top-wrist lock into a CRUEL shoulder lock.
-A DWL that you can secure with only two-fingers!
-Armbar from the head and arm (scarf hold)
-Gouging and rough & tumble set-ups
-A simple reversal out of a DWL into a hammerlock

Bodymaking
-Attacks the abdominals and core from a variety of angles

Arms II
-Tight wristlock set up into a straight arm-bar
-"Turking" to apply armbars with your legs!
-Really mean reverse armbars
-How to turn your opponent's single leg takedown attempt into a reverse armbar, neck crank, etc. with the sprawl and spin maneuver.
-Head & arm submissions and a simple way to bride out of the head & arm.

Neck I
-A very technical look at the triangle choke plus a variety of innovative set-ups
-Also, many other tips to make your no-gi chokes more effective and tight.

All this, plus there are animated diagrams showing the force vectors and pressure points to use!

The ADVANCED course is just that, for the more advanced student.

Here is a sample of the menu to choose from on the ADVANCED course (Video #2):

Advanced I
-How to maim a turtled opponent with toe holds, unique Achilles locks, cross faces, even your chin!
-How to blanket ride and make your opponent carry your weight
-Rough & Tumble and gouging tricks to force your opponent to open themselves up to submissions
-Choke, cranks, and strangle variations
-How to turn a simple cradle into an excruciating submission
-Nail the toe-hold from the ball & chain ride
-A clinic on toe-holds
-the INFAMOUS oil-check (yes, I think it was revealed on video here first)

There is also some footage from both some Japanese strong-style pro-wrestling and competitive shoot wrestling matches at the end.

On the weekend of February 22nd, 2006 Scientific Wrestling flew in submission master Yoshiaki Fujiwara and legendary carnival hook wrestler Dick Cardinal for a Catch Wrestling summit of sorts in Los Angeles. There was also the added bonus of having Mr. Yuki Ishikawa (PWFG wrestler, Pride fighter and BattleArts owner) along to help with training.

Dick Cardinal is an amateur wrestling champion and a legendary carnival wrestler hailing from the Pacific NorthWest and frequent workout partner of legendary wrestler Ben Sherman.

Here's a list of some of the stuff Mr. Cardinal covered:

Finally, there is also a lengthy Q & A section too where the participants quiz Mr. Fujiwara for solutions to particular problems. Mr. Fujiwara and Mr. Ishikawa took time to help every single participant and with this bonus feature, you can know what it is actually like to attend a Scientific Wrestling seminar!