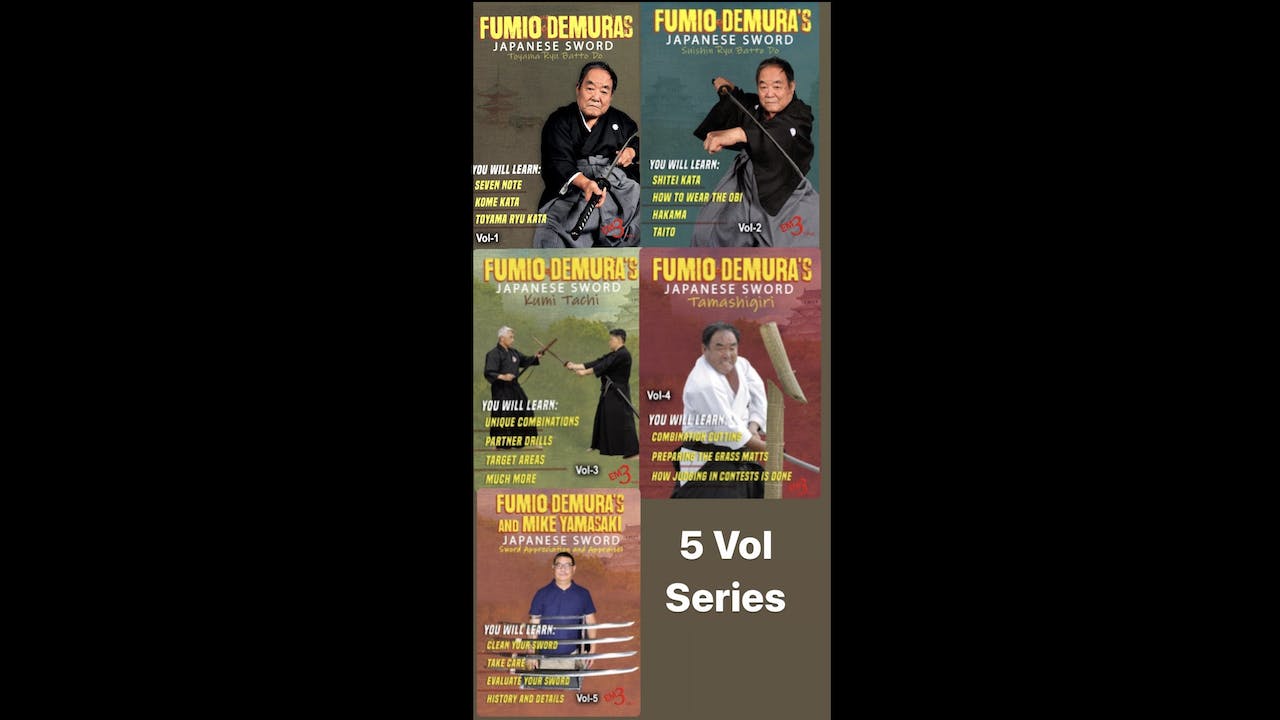 Demura Fumio, born September 15, 1938 in Yokohama, Japan is a well known master of karate and kobudo (traditional weaponry). Demura holds the rank of 9th dan in Shitō-ryū Karate. At the age of 9 (1947/48), he began training in karate and kendo under an instructor named Asano. At 12 he started training under Ryusho Sakagami in Itosu-kai karate. Demura received his 1st dan black belt in 1956, and won the East Japan Championships in 1957. In 1959, he began training in kobudo, under Taira Shinken. In 1963, he "came to know the Koga Ryu Ninjutsu Soke, Seiko Fujita- a 14th Generation Koga Ryu Ninja". Demura met martial arts scholar Donn Draeger, who introduced him to Dan Ivan, who would eventually bring him to the United States of America as a karate instructor.

Vol-1 SEVEN NOTE - KOME KATA - TOYAMA RYU KATA
Sword technique Toyama Ryu was devised emphasizing the most essential point of drawing and cutting from standing position. This modern Ryu has a strong emphasis on tamashigiri, or "test-cutting". Sensei Demura and his assistants teach you these intricacies and much more including: Seven Note, Kome Kata and Toyama Ryu Kata. Learn the secrets of this wonderful art form. Item: em3-85-12 ISBN: 0694536339729 TRT: 51 minutes

Vol-2 SUISHIN-RYU BATTO-DO SHITEI KATA - OBI - HAKAMA & TAITO
This instructional video teaches how to draw and cut against single and multiple attackers. It includes detailed demonstrations and explanation of posture, footwork, draw, cut and NOTO (returning the sword to the scabbard). Also how to put on, wear and take off the OBI (belt) as well as how to fold your Hakama.Item: em3-85-13 ISBN: 0694536339736 TRT: 46 minutes

Usage of a bokken in their modern form first emerged during the Muromachi Period (1336–1600) for the training of samurai warriors in the various ryūs (schools of martial arts and swordsmanship) of the era. Bokken are safer than fighting with real swords, and are considerably more durable; a wielder can make contact with other trainee's swords with little fear of damage.

While bokken are safer for sparring and practice than katanas, they are still lethal weapons in the hands of trained users. A famous legend to this effect exists involves Miyamoto Musashi, a ronin known to fight fully armed foes with only one or two bokkens. According to the story, he agreed to a duel with Sasaki Kojiro at the early morning on Ganryūjima island. Musashi carved a crude bokken from an oar with his knife while traveling on a boat to the duel. At the duel, Sasaki was armed with his large nodachi, yet Musashi crushed Sasaki's skull with a single blow from his bokken, killing him. Item: em3-85-14 ISBN: 0694536339743 TRT: 29 minutes

Vol-4 TAMASHIGIRI (test cutting)
During the Edo period, only the most skilled swordsmen were chosen to test swords, so that the swordsman's skill was not questionable in determining how well the sword cut. The materials used to test swords varied greatly. Some substances were wara (rice straw), goza (the top layer of tatami mats), bamboo, and thin steel sheets. In addition, there were a wide variety of cuts used on cadavers and occasionally convicted criminals, from tabi-gata (ankle cut) to O-kesa (diagonal cut from shoulder to opposite hip). The names of the types of cuts on cadavers show exactly where on the body the cut was made. Aside from specific cuts made on cadavers, there were the normal cuts of Japanese swordsmanship, i.e. downward diagonal Kesa-giri (袈裟斬り), upward diagonal (Kiri-age (切上) or Gyaku-kesa (逆袈裟)), horizontal (Yoko or Tsuihei), and straight downward (Jodan-giri, Happonme, Makko-giri (真向斬り), Shinchoku-giri or Dottan-giri). Item: em3-85-15 ISBN: 0694536339750 TRT: 25 minutes

Vol-5 BASIC JAPANESE SWORD KNOWLEDGE SEMINAR By Mike Yamasaki
Mike Yamasaki has been involved in the study of Japanese swords for over 27 years. Studying both in the United States and in Japan, he has had the opportunity to attend several "Kantei Kai" or what is known as a sword identification challenge held monthly at the NBTHK. In 1998, he attended the NBTHK 40th anniversary national sword convention and received an award for placing 5th out of 200+ participants. Then again in Sept 2001, he became the first ever non-Japanese citizen to ever win this competition. The most recent NBTHK national convention (Nov 2008), he entered the challenge once again and landed 2nd place. The Nihon Bijutsu Token Hozon Kyokai (NBTHK), or the Society for the Preservation of Japanese Art Swords, was founded in Japan shortly after WWII and has existed since with the approval of the Japanese government.