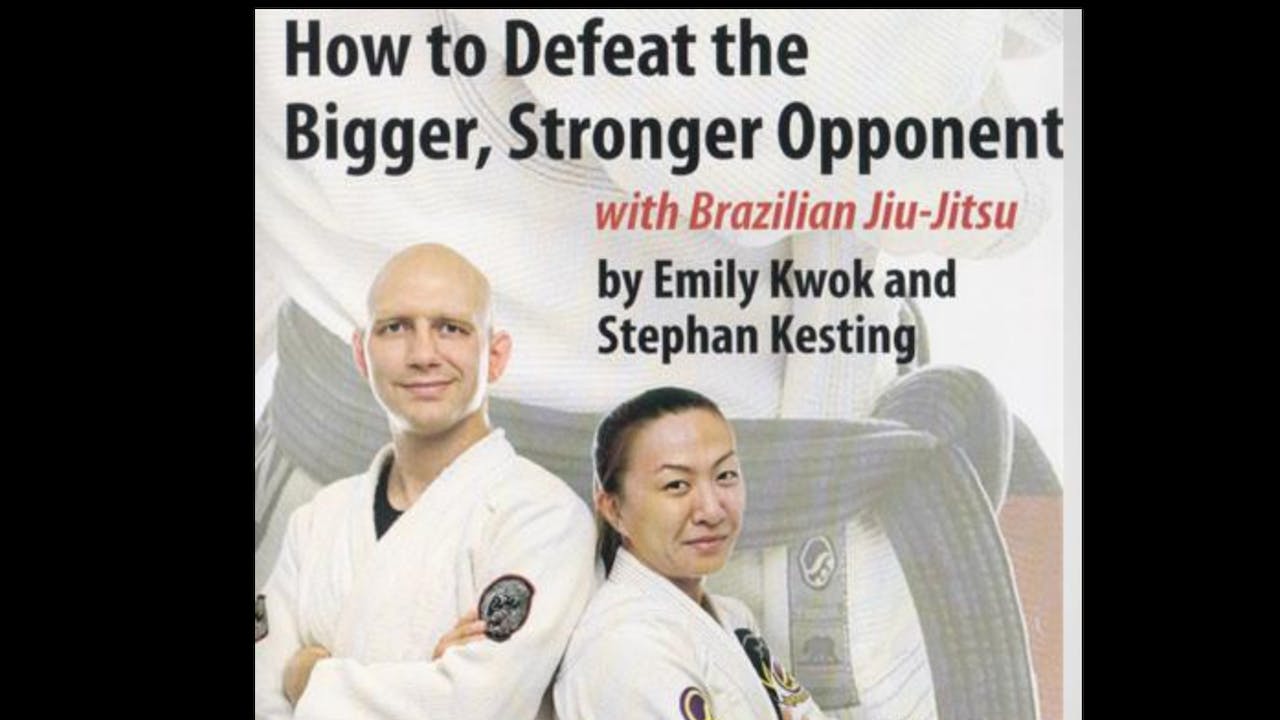 How to Defeat the Bigger Stronger Opponent 1

Emily starts by sharing her favorite fundamental, advanced and two-person partner drills. Warm up your body, build strength and endurance, and create a foundation for the rest of her system with these highly functional sport-specific movements.

In part two of this volume Emily gives you a detailed what-to-do breakdown of stand-up and ground-based gripfighting. She covers techniques that'll work against opponents of any size and of any grip strength. She also shares specific gripfighting strategies and mindsets that have helped her win world titles in both gi and no-gi grappling competitions.

Vol 2: Compensating for Strength
Not all guard positions keep you safe or are effective when you've facing someone who is much larger and heavier than you. Here Emily shares her favorite guard positions that work well against bigger people, and breaks them down so you'll be able to keep good position and successfully defend guard passing attempts. Plus she teaches you which sweeps work against ALL sizes of opponents, not just ones your own size.

In part two Emily takes you through her bread and butter guard passes that she uses again and again when facing larger opponents. Don't let guard passing turn into a battle of strength; use speed, leverage and timing instead! Emily teaches you the secrets of 'ganging up' on your opponent by using your whole body to dominate ONE of his limbs. Once you isolate a limb you can then use it to get past their guard and into a good position where you can dominate the rest of the fight.

A highly sport-specific and functional warmup for a group of people of all sizes, A detailed breakdown of Emily's approach to attacking from rearmount, including secrets learned from Marcelo Garcia,
How to finish the guillotine even when your opponent is taller and stronger than you with a much larger neck, How to attack with the guillotine in a way that sets up an instant guard pass
When NOT to attack with the guillotine from guard
Sweeps that use your opponent's size to your advantage
A choke that works on bigger, stronger Goliaths, even if you're only using one hand
What to do when your opponent stalls in your guard, trying to shut down your attacks
How to protect your fingers from getting mauled when gripfighting,
Emily's favorite X Guard pass
The keys to controlling the rear mount so that your opponent can't squirm or power out of it, and how to put him into constant danger of getting submitted
Which traditional teaching techniques actually hinder your progress,
Two high-percentage moves to recover from a failed butterfly guard sweep, even if your opponent is trying to use his superior size to crush you and shut down your game
The mindset you MUST maintain to prevent your sweeps from being shut down and having your guard passed
and more...

Vol 5: An Introduction to Total Body Stability
by Roy Duquette with Emily Kwok