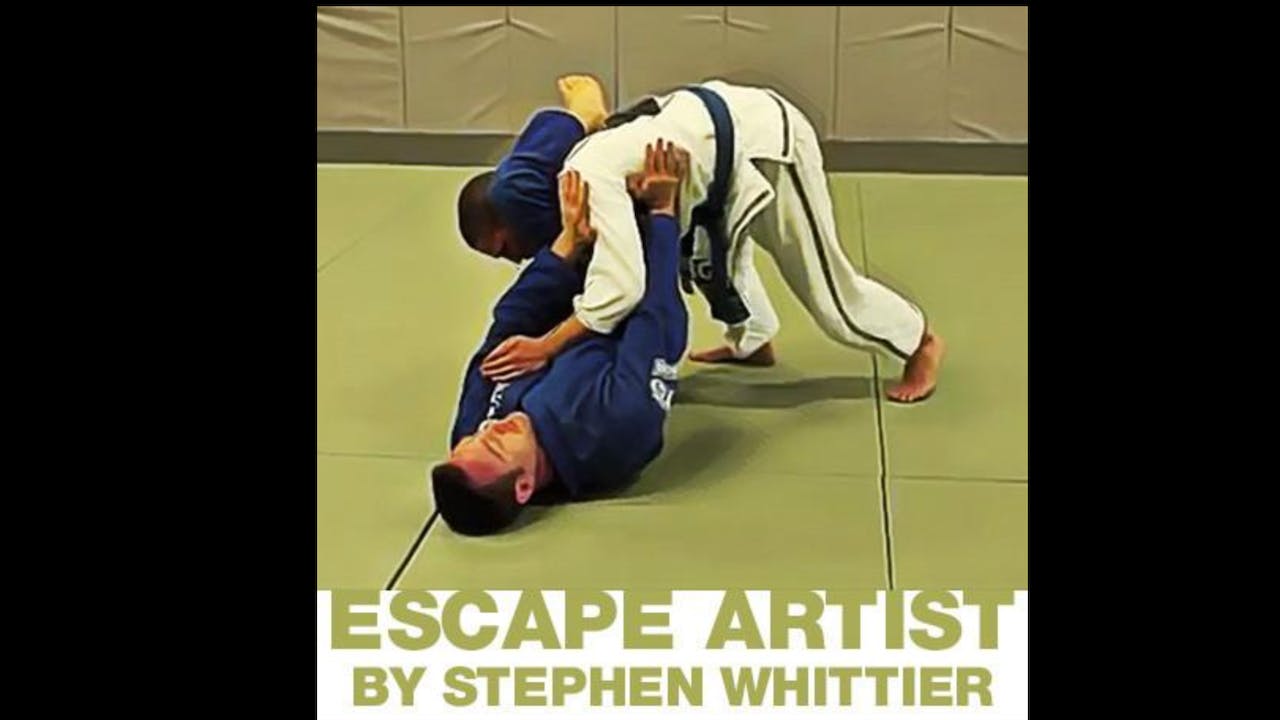 Look no further than the concept of the “zero point” laid out by the man himself, Rickson Gracie….
"You must allow yourself to go as on automatic pilot. You must allow yourself to be on a zero point, on a neutral point, and be relaxed and connected with the variations, so pretty much ‘flow with the go’…. This is a point beyond the knowledge; it’s years and years of playing around to get this sensibility.”
Learn To Achieve This 'Zero Point' Faster Than You Ever Dreamed Possible!

The Escape Artist Includes...
VOLUME ONE: UNDER THE LEGS PASS DEFENSE
√ Learn how to kill the pass at the root – and easily beat your opponent’s passing posture before they get tight.
√ Discover the unseen pressure from bottom that will make your opponent feel like they’re holding a bag of weights (they’ll be doing all the work while you use minimal energy).
√ The sneaky “double grip and surf” technique that will make them want to bail on the pass before they ever get under your hips.
√ A special section on body alignment and injury prevention (the under pass is one of the biggest culprits for “popped ribs” in the game). This one will keep you healthy so you can spend more time on the mat.
√ Learn the complete drilling progression you need to kill the under pass every time!
√ PLUS: how to attack your opponent as they try to pass so their offense turns into YOUR submission!
And Much More...
VOLUME TWO: BACK MOUNT ESCAPES
√ Learn the most effective postures and routes for escaping the back mount positIon.
√ "Head Games” – I’ll show you exactly how important head position (and head fighting) is to the escapes game, and how you can change your game overnight with this one skill!
√ Discover how to stay offline from your opponents hooks so you can confidently escape in transition.
√ Learn the importance of “shoulder walking” – and why this is what most grapplers miss after they’ve started their escape.
√ How to defend the most common collar chokes (the right grips every time!)
√ When to go high or low with your escape – and how to turn into your opponent without exposing your back again.
And Much More...
VOLUME THREE: DEFENDING & DEFLECTING PASSES & TOP CONTROL
√ Use your frames together with your opponent’s pressure to keep them from landing into a pass.
√ How to use a fraction of the energy by properly “steering” your opponent’s weight (it’s way easier on the body too!)
√ Learn a super-simple method for hitting a “Kiss of the Dragon” type sweep – no crazy flexibility or athleticism required!
√ Simple defenses for Knee Shield, Over/Under, and Knee Cut passes that force your opponents into the sweep!
√ How to kill your opponent’s cross-face from half guard bottom and unbalance them even when they’ve got you pinned.
And Much More...
VOLUME FOUR: NEXT LEVEL ESCAPES
√ Learn the “turtle shell” method for instantly gaining a ton more space to escape with – even if your opponent is MUCH heavier.
√ Defend even a vice-tight cross-face from side bottom.
√ Discover secret to building frames from the bottom using no muscle, even when your opponent is smashing you with tight chest-to-chest pressure.
√ Learn how to set up the hand-in-armpit escape so your training partners virtually give it away.
√ Discover the “Turtle Guard for Dummies” side escape. Master this and even the giants won’t be able to smash you again.
√ I’ll even show you my personal sneaky favorite, the Ninja Roll. A trick from a 150lb former world champion to roll opponents twice his size without power.
And Much More...